Playing of the highest quality

An attractive if somewhat unconventional programme drew a full house for the AST’s concert on Saturday, with playing of highest quality.

No overture, but straight into Beethoven’s 1st piano concerto, the distinguished soloist Piers Lane giving a sparkling account of the first movement, followed by a beautifully poetic largo, and a fast, but never rushed, finale, with sympathetic and taut conducting from conductor, Benjamin Pope.

One does not usually expect an encore after a Beethoven concerto, but this was no ordinary concert, and after tumultuous applause, Lane gave a dazzling performance of Dudley Moore’s hilarious idea of how Beethoven might have treated the Colonel Bogey march

The second half consisted of a large chunk of the whole of Tchaikovsky’s Swan Lake, deftly arranged into a satisfactory form by Benjamin Pope. Pope conducted superbly, bringing out all the music’s warmth and drama with perfectly judged tempi, from an orchestra on excellent form, with much fine solo playing.

After that, the applause said it all. 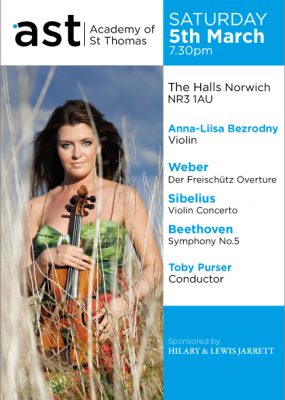