AST Sparkles as it returns to Salle

Well worth the 300-mile round trip

I was lucky enough to be among a large and very enthusiastic audience last Saturday (18th) when the Academy of St Thomas returned to Salle Church after an absence of three years.

I now live in Kent, but have followed the Academy since their first concert in 1973. I am particularly looking forward to next season, which will be a major landmark: their 50th.

The programme of mainly English music included Vaughan Williams, Handel, Britten and Elgar, with a coda supplied by Haydn. Matt Andrews and the Academy took full advantage of the Salle acoustic, especially in the highly atmospheric Serenade for Tenor, Horn and Strings, with soloists Joshua Ellicott and Anna Douglass (both of whom were superb). Five Variants on Dives and Lazarus, along with the encore, Fantasia on Greensleeves, evoked English landscapes as only Vaughan Williams can, and the Elgar miniature, Sospiri, was touching in its simplicity. Haydn’s Symphony No 43, (known as the Mercury) was played with suitable elan by the Academy, whose strings were again in sparkling form (as they had been when Handel’s Queen of Sheba “arrived” in a flurry of semi-quavers to open the proceedings).

Well worth the 300-mile round trip! 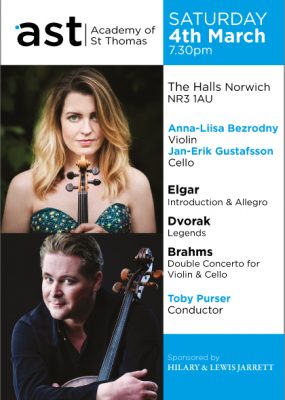