In the light of recent events, it will represent a mark of solidarity with the Ukrainian people and a celebration of democratic self-determination.  The centrepiece will be the Sibelius Violin Concerto, performed by Estonian/Finnish virtuoso Anna-Liisa Bezrodny.  Anna-Liisa has received great acclaim from critics around the globe and her international roots add particular potency, in view of the current conflict.

The Ukrainian national anthem will be included as a mark of respect and a retiring collection will be made for the work of the charity Street Child in Ukraine. Beethoven’s Symphony No 5 completes the evening – one of the greatest expressions of freedom in a time of despotism.

Conductor Toby Purser will make his Norwich debut. Toby is the newly-appointed Head of Conducting at the Royal College of Music and his conducting has been praised for its combination of passion and intellect, poetry and drama.

We urge you to join us at St Andrew’s Hall, Norwich for this unique occasion. 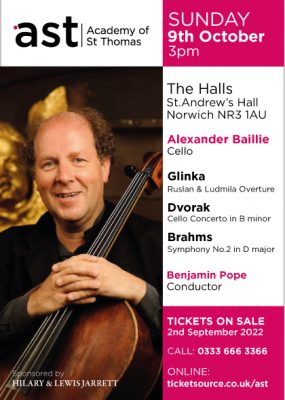